SAN FRANCISCO -- Instead of relying on policing and punishment, San Francisco’s public safety depends on significant new investments in our community safety net. To San Franciscans, it’s clear: we must end the city’s reliance on police forces to handle mental health emergencies, homelessness, maintenance violations, and other non-violent situations.

After months of nationwide demonstrations, calls to “defund” and “disarm” the police have resonated strongly with the people of San Francisco, who agree that it’s time to change how police departments operate, narrow the scope of the police department’s responsibilities, and invest in urgently-needed services that better serve the public.

New polling shows that 62% of San Franciscans support a new model of policing in which officers are unarmed when they are on patrol, and are only only equipped with firearms in
special circumstances.

And after months of protests following the death of George Floyd, 84% of San Francisco residents believe that police officers use unnecessary force, and agree that we must hold our police departments to a higher standard.

San Franciscans are particularly concerned about the impact of policing on people of color -- with 83% and 78% of respondents stating that police in the Bay Area use excessive force against Black and Brown residents, respectively.

“No person of color is shocked when they see data from the poll showing that 83% of San Francisco residents believe that excessive force negatively impacts the Black community, and 78% believe the Latino community experiences the same unnecessary force,” said San Francisco Supervisor Shamann Walton. “The very people that are hired to keep us safe, are the very people that many of us fear the most. This is not an individual fault, but deeply rooted in the oppressive systems that we have created with the false pretense of keeping us safe. This treatment is unfair and unjust, and this survey finally gives voice to how people feel when they have witnessed these injustices.  My community and many other communities of color have been harmed and it is time to address this structural racism and begin reenvisioning what public safety can look like. Let’s reshape the national standard going forward.”

San Franciscans overwhelmingly agree that the City should divert funding to social services -- investing in unarmed trained professionals such as mental health counselors, conflict mediators, or case workers to intervene in non-emergency situations.

“Adults with mental illness account for 1 in 4 people killed in police encounters,” said San Francisco Supervisor Matt Haney. “Police officers should not be our first responders to people experiencing a mental health crisis. We need to deploy unarmed professionals who will not criminalize mental health or addiction, and instead are clinically trained to get people immediately into care."

Supervisors Haney and Hillary Ronen included Crisis Intervention Street Teams as a part of Mental Health SF, and plan to fight for at least $10 million over the next two years to fund clinically trained street crisis teams to be the first responders for people suffering from mental health crises' on the streets. 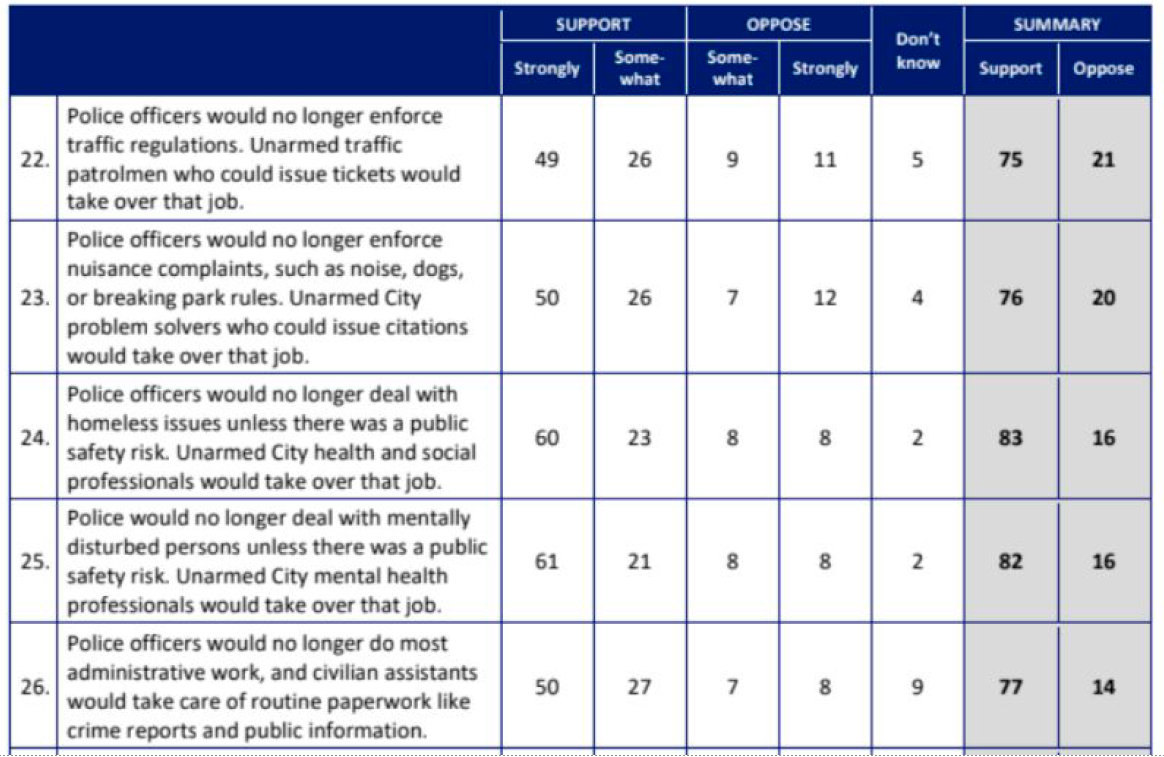 This shift would significantly shrink the role of the police in our communities, lighten the workload for officers, and remove the department’s responsibility of responding to the homeless, mental health crises, schools -- or any situation that does not require an armed response.

Respondents felt that duties ranging from traffic enforcement and administrative work to homeless outreach and mental health crisis response should be handled by civilians who are trained to manage situations that do not pose a risk to public safety.

"This poll is timely, and demonstrates strong public support for reimagining public safety in San Francisco," said San Francisco Supervisor and Budget Chair Sandra Lee Fewer. "These results reaffirm what we've been hearing from constituents, that there is a desire for the reallocation of resources from policing to proactive and effective community safety programs."

David Binder Research conducted a survey of 400 San Francisco voters estimated as likely to vote in November 2020. Interviews were conducted from July 11 th-14th, 2020. Additional oversamples were taken in specific districts and among African American voters to improve reliability of results among those groups. Overall results presented are representative of the San Francisco likely voter population as a whole. The survey was conducted by telephone and online, with respondents recruited using phone numbers and email addresses from the state voter file. The margin of error for the full sample is ±4.9% and it is larger for subgroups.